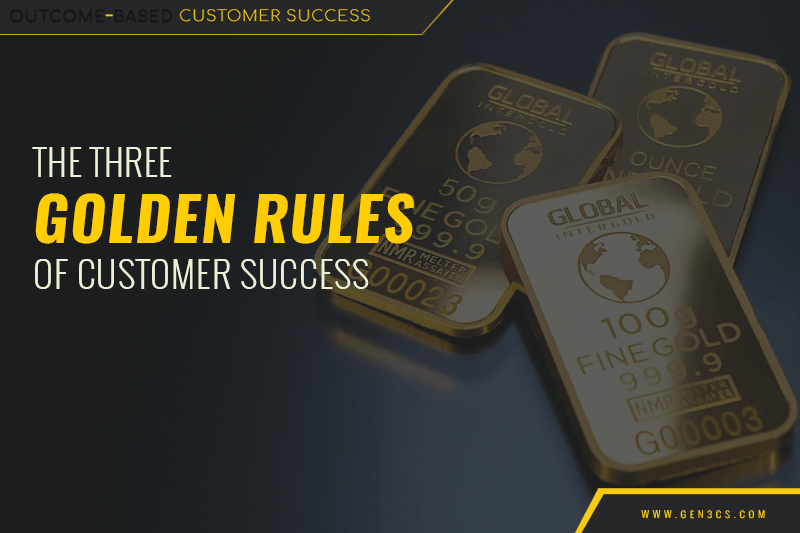 There’s much debate about whether Customer Success should have revenue targets. If you know the three golden rules, the answer becomes clear.

Rule #1: The Success a Customer Has This Time Drives the Gold They Will Pay Next Time

It’s clear that power has shifted back to the customer under a recurring revenue model. If customers don’t feel they’ve had success with the vendor, they have some choices. They can cancel their subscription completely. They can reduce subscriptions. Or, they can stagnate – keep what they have but not expand. All three of these choices lead to reduced future revenue for the vendor.

But, if the customer believes they’ve had success, they’ll renew. And they’ll welcome expansion with increased upsell and cross-sell opportunities.

At the heart of this formula is how the customer feels. Objective measures help. But, in the end, it’s what the customer believes about their own success.

And the success they have this time determines how much gold they’ll spend with us next time.

Rule #2: Whoever Creates Success, Brings in the Gold

When Customer Success first started, everyone focused on usage. People believed, “if the customers use our software, then they’re successful. And they’re even more successful if they use our advanced features. Use of the product will lead to renewal and expansion.”

But the use of a vendor’s product doesn’t constitute success for a customer. The vendor’s product is a means to an end. Its purpose is to solve a problem or enable a new outcome. If the problem isn’t solved or the outcome not achieved, the customer will not consider they’ve had success.

So, vendors need to be crystal clear about what the customer considers success to be. And they must do everything they can to ensure the customers achieve that success.

And that’s because the success the customer has this time determines how much gold they’ll spend with us next time.

So, whoever creates success for the customer brings in the gold.

Rule #3: Whoever Has the Gold, Makes the Rules

Jean-Jacques Rousseau has credit for this idea. In 1764, he said: “Le riche tient la loi dans sa bourse.” (The rich holds the law in his purse).

In 1964, in the strip cartoon The Wizard of Id, we learnt ‘Whoever has the gold, makes the rules!’

In business, every department wants to ‘make the rules’. They all want influence. The Customer Success Department is no exception. The evolving nature of customer success means the CS department needs to evolve. And CS needs to bring the rest of the organisation along.

Without influence, it’s tough for a CS leader to drive the changes needed. So, CS leaders need influence. They need the ability to sway fellow executives. And that’s hard, because competing interests and opinions abound. And that’s why the three golden rules of customer success are important.

Let’s look at the ability to influence the organisation. Picture a meeting of a vendor’s executives. They’re debating strategies. The VP of Customer Success has noticed a disturbing trend. Sales is selling to companies that have little chance of success. As a result, churn has increased and expansion (upsell and cross-sell) has decreased. She wants to convince Sales to be more selective.

Now imagine two scenarios. In scenario one, Customer Success has no revenue targets. In the meeting, the VP of Customer Success says, “Our CSM’s face increasing difficulty. They believe the new customers coming from Sales are the wrong types of companies. They’re not a good fit for our product and so these customers aren’t achieving success. And that’s increasing our churn. I also believe it has reduced upsell and cross-sell.”

The VP of Sales responds, “You don’t know how tough our market is. We need to close whatever deals we can. The prospects must think we’re a good fit otherwise they wouldn’t sign up. You need to give your CSM’s more training so they do a better job. It’s my team that’s measured on upsell and cross-sell. They’re hurting because your team can’t create success. That’s why we’re not making the numbers.”

The VP of Customer Success finds herself in a tough place. The CEO will listen to those responsible for creating revenue. Their opinions carry the greatest weight. The CEO also has pressure to achieve the quarterly number, and says, “Okay, good discussion. Let’s all give this further thought and pick it up again at our next quarterly meeting. What’s the next agenda item?”

Now consider scenario two. The VP of Customer Success has a renewal and churn target. She also has a target for expansion (upsell and cross-sell). The CSM’s don’t close the deals, but they do build the pipeline of opportunities for expansion. The VP’s financial measures are renewals and the value of the expansion pipeline.

Now let’s go back to that same executive meeting. The VP of Customer Success still believes that Sales are selling to the wrong prospects. She says, “The percentage of customers not renewing on their first anniversary date has increased by 20%. Our pipeline for expansion has dropped by 15%. These are numbers I am accountable for. I’ve analysed the problem. The new customers aren’t adopting our product the way previous customers have. It’s clear we’re selling to the wrong prospects.”

She turns to the CEO, “If we continue selling to the wrong prospects, we might make this quarter’s numbers. But we will fail further down the line. And Customer Success will not be able to deliver the pipeline of revenue expansion we’ve done in the past.”

The VP of Sales says are, “If your people were better trained, we wouldn’t have this problem. And our focus needs to be on making this quarter’s numbers.”

The CEO says, “While this quarter’s numbers are important, there’s no point setting ourselves up for failure down the road. I’d like you both to define our ideal customer. We need to maximise lifetime value from our sales efforts. Let’s pick the prospects that will do that.”

Having a direct and measurable impact on revenue growth gives the VP of Customer Success much greater influence. As a result, she achieves the outcome that was in the best interests of the company. And of the customers.

CS leaders know they must create success for their customers, because that’s what brings in the gold.

To create greater success for their customers, Customer Success needs greater influence in their own organization.

To get greater influence, they need responsibility (and credit) for bringing in the gold. For growing revenue.

And that means they need revenue targets.

This article is based on the book; The Outcome Generation: How a New Generation of Technology Vendors Thrives through True Customer Success

NOW AVAILABLE AS AN AUDIO BOOK!

Paul Henderson is an author, speaker and consultant on outcome-based customer success for technology vendors. His last role was leading the Asia Pacific region of an enterprise software company. He saw the potential that could come from delivering real and measurable business success for customers. So, he initiated a customer success program based on customer outcomes. He and his colleagues developed, modified and proved the model over more than five years. He thespent one a half years researching and writing, culminating in the release of The Outcome Generation.